Why is Aikido Evolutionary? 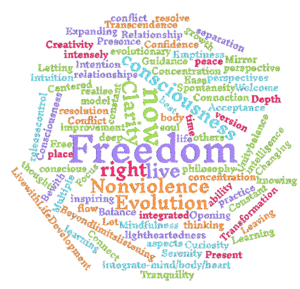 Why is Aikido evolutionary? There are many of us in the Aikido community that use the word evolutionary as being a quality of the art that we practice.

For myself, I had from the beginning seen Aikido, one as being a sophisticated, powerful yet subtle martial art. Secondly, Aikido had the promise of being a spiritual practice, a method that can foster and facilitate, a spiritual awakening. Thirdly, it also offered a path to discovering a greater systemic integrity, a chance to fully embody oneself and express all of the capacities and power one has just by being in touch with the subtle and energetic levels of being alive.

But it was only much later that I saw that the biggest gift that Aikido offers is the aspect of stimulating evolution in our species. Aikido is naturally aligned with the movement of evolution as Aikido itself is an expression of evolution. It is the first and only martial art that expresses a systemic integral viewpoint concerning conflict. The realization that to truly resolve a conflict, you must give attention to the whole. It reminds that just winning over another is a limited success. Being successful at the loss of another leads to the result of a “zero sum”, an equation that ends in no gain for the whole. Aikido is the realization, that to truly be victorious one must go beyond winning and losing and look for a harmony that includes the whole. Aikido is a movement of looking beyond the “me” and connecting with a “we”.

Yet in the practice, the techniques are not limited to being gentle, or peaceful. The movements can be devastatingly powerful and in the wrong hands extraordinarily painful and vicious. Aikido is powerful, yet the nature of its power lies in that it is not meant to be against the other. It is a power that not only protects the individual, it protects the relationship that the individual shares with the other. Aikido can express a power that unifies us in a clear and uncompromising way. For me Aikido is not polite, but rather can be ruthless in the compassion it expresses.

In this fashion, Aikido points to a way of being fully engaged in a conflict without being aggressively in opposition, or a passive (aggressive) victim, or being in resistive denial. Aikido explores how to face a threat and respond fully involved and engaged in a way the benefits the whole. This new way of being with a threat in conflict is all about acknowledging a new perspective. A perspective that reaffirms the truth of life: we are not separate. We exist in a system that contains each part. If we damage a part of that system, we damage ourselves. We cannot separate ourselves from the impact that our actions have on another. Even in a physical conflict our actions need to be in accordance with the relationship we have with the situation. If we ignore that relationship, we create suffering for ourselves later on. If a father loses his perspective in a conflict with his son and strikes him out of rage, his life will be impacted for the worse. He has lost himself. Anytime we lose ourselves, we lose. Whenever we lose our perspective and project that the threat to our wellbeing exists outside of ourselves, we lose already. This is aligned with the spiritual realization that our ground of being is an inherent dimension of who we are. Our wellbeing is a product of discovering that we are the source of our own peace. This independence of awakening reminds us that no one can take that source of peace from us.

How does this all relate to evolution? For so much of our history, whenever we have faced a threat to our survival, our solution lied in engaging a strong aggressive defense or a wise surrender or a skillful isolation. In past global conflicts, this manifested in similar ways as during both world wars, the attack on 9/11, dealing with Isis, etc… Yet as we experience the collective crisis in the world today, facing the covid 19 is unlike anything we have faced in recent human history. This is a systemic threat that does not appear from without but from within. The whole of humanity is threatened. We are helpless to find an enemy amongst us. There is no one to attack, or to kill as a solution to this threat. And this threat is something that we all are needing to acknowledge simultaneously. No one is left out; we are all included in this situation. This has bestowed a direct experience to everyone that we are interconnected in our lives. We are part of a living system that includes everything.

As we attempt to react to this threat of a pandemic, this conflict, we find that our old ways of behavior are not capable of creating any kind of solution. We cannot attack it back, we cannot surrender and negotiate a contract with it, and we cannot ignore it. Our operating systems are not up to the task of navigating our current collective crisis. And it is obvious for future global threats, we need a new operating system.

We need a system that gets us out of looking for winning vs losing as the only paradigm. We need a way that responds to threats and cares for the whole system. A system that is pro-active not aggressive, inclusive not divisive, aligned with a greater intelligence rather than just operating from our own ambition and fear.

Can we create an operating system that functions not only in accordance with the relationship we have with others but with the relationship we have with ourselves, with our own system? Can we be in accordance within ourselves, between our thoughts, emotions and impulses? Can we find a balance within? A balance between our mind, heart and body? Can we find a way not only to address our collective violence and communal shadows, but face the shadow that we have within ourselves? What kind of operating system would that be? What kind of way of being and becoming would we need to incarnate? What would that look like?

This is uncharted territory for most of us. We have grown up and lived for so long in a conflicted, competitive cultural context that we often don’t even see it. Like fish that live in water but cannot see the water, we cannot see outside of our cultural conditioned lifestyle. What would going beyond competition and conflict look like? Not anti-competition, or anti conflict, because that is still in conflict. Not a state of post competition, because that is a negation of competition, and therefore still trapped in opposition. But can we bridge a state of being with the whole and being responsive to conflict? A being that includes conflict but is not trapped by it? A being that acknowledges competition but is no defined by it? Where we access multi perspectives simultaneously: the individual, the relationship, the collective, the natural world, and the movement of life itself? Can we find a perspective that can help us navigate the collective crisis where we can honor our personal lives, our communities, our cultures and the natural biosphere we inhabit? Does Aikido offer a path to discover this? If it does, wouldn’t that be an evolutionary step for humanity?